Getting the Genetics Right 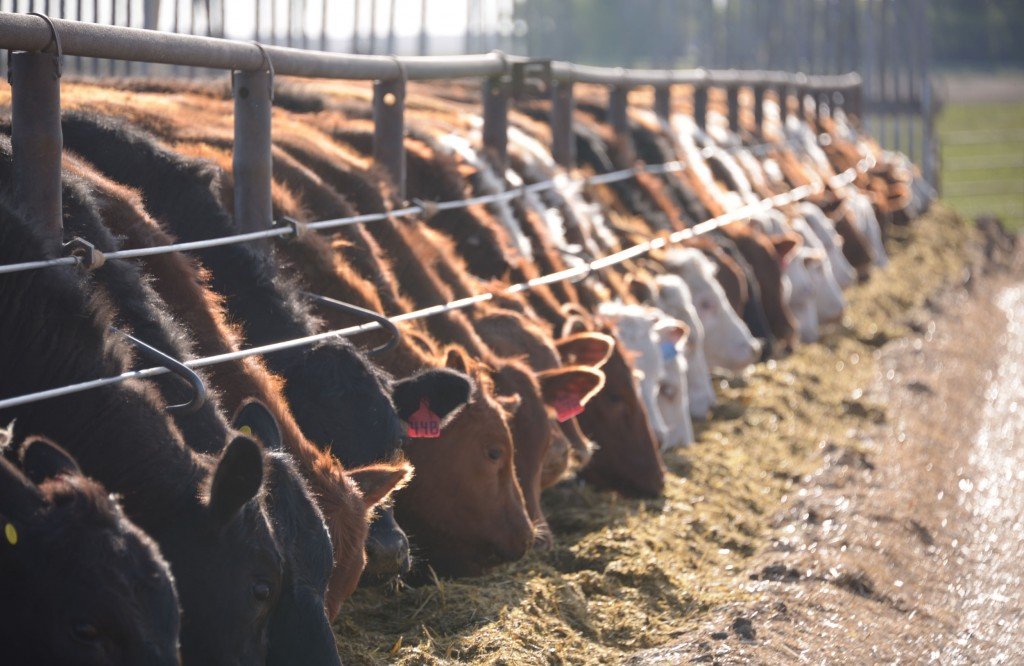 On 1,500 acres in eastern Alberta, Arno, Tim and Daniel Doerksen are hard at work getting ready for their Gemstone Cattle Company’s second annual bull and female sale in Brooks, Alta. in December. The sale will include purebred Hereford and Angus bulls as well as Hereford, Angus and Hereford Angus-cross commercial heifers.

The Doerksen family has been farming and raising Hereford cattle on this farm for almost a century and while the present generation is now focused on the future of Gemstone Cattle Company, it owes a lot to its past. Daniel’s great-grandfather, Peter Doerksen, came to Gem, Alta. in 1932 to a piece of land offered by the Canadian Pacific Railway within today’s Eastern Irrigation District. At the time, Peter noted that the land was covered with thistles, which indicated to him that it was fertile and a desirable place to settle. Peter’s son Jake Doerksen worked the farm and now his sons, Arno and Tim, along with Arno’s son Daniel, operate Doerksen Farms.

Arno has been raising Herefords for over 40 years and he and Daniel have developed their own breeding program and have chosen to raise moderate-framed cows, and to closely track genetic traits through line-breeding. Their breeding cattle are primarily raised on forage without grain supplements.

Selections are thus made to generate moderate-framed cows and bulls which are more efficient at converting forage into beef in their environment, and reinforce soughtafter traits such as longevity, fertility, easy calving, and easy keeping. The feed-efficiency factor is not a guess. The Canadian Hereford Association (CHA) initiated residual feed intake (RFI) research three years ago to test feed efficiency in the breed, and the Doerksens had bulls in the project from the beginning. One year, 23 of their 26 bulls in the test group of 1,000 animals scored in the top 18 per cent for RFI.

“I think our low RFI scores have to do with line breeding the right type of cattle and the consistency in the pedigrees that we have developed,” says Daniel. Last year, the Doerksens entered Hereford and Angus bulls into the RFI trials. They have had their purebred Angus herd for two years and have already seen good results.

“We feel we are on the right track with the Angus genetics we’re using,” says Daniel. “At this point, while the Angus association doesn’t generate RFI EPDs, we are able to compare the results from the Angus bulls to the Hereford bulls in our herd, and they stack up well.

“Our cows work for us, not the other way around,” says Daniel, who knows their cattle have done well on forage, as they continue to pressure both herds to be feed efficient.

“We have seen the positive impact of line breeding with Herefords and how it has concentrated the genetics and improved consistency,” adds Arno. “Only recently have we had DNA tests available for specific factors like RFI and Leptin. The testing results suggest we are on the right track with our breeding program.”

Now, as this field of research into beef cattle genetics is expanding, Arno and Daniel are using available genetic testing data to refine their selection process. They believe there is an opportunity here for cow-calf producers to improve profitability by selecting genetics for feed efficiency.

According to the CHA website, selecting for RFI may result in as much as a nine to 10 per cent reduction in cow herd maintenance costs, and a 10 to 12 per cent drop in feed intake. Results from the CHA’s RFI trials go to the University of Alberta research centre, Livestock Gentec for analysis, and then the information is made available to the breed associations and the breeders.

Dr. John Basarab, the senior beef research scientist for Alberta Agriculture and Rural Development, is responsible for taking the data from the RFI trials and calculating the RFI value for each animal tested.

“Part of why I think the Doerksen bulls have a low RFI is because they are subjected to an extensive grazing environment, and they have selected the animals for efficiency,” says Basarab. “There are many herds raised in the same conditions, but I think with the Doerksens, it is how they select which bulls to use and which cows to keep that has worked.

“What makes Arno and Daniel unique is unclear,” Basarab says. “Maybe it is because they are more diligent than others with their breeding program. If Arno had been measuring RFI 10 years ago, and no one else had, then absolutely his results could be explained. But he hasn’t been able to use RFI values for selection. So it is likely his location, breeding, good management and record-keeping that has helped to produce those results. He has picked the animals that would perform the best under his conditions.”

For the Doerksen family, going forward with the business also includes a strong respect for history and family values. Contributing to their community is one of those values. In spite of the demands they face in managing the various aspects of Gemstone Cattle Company and the crops, the three men and their families are actively involved in their local community and church.

“We all enjoy farming and working with cattle, and the people involved in the agriculture industry,” explains Arno.

Since 1993, Arno has provided strong leadership to the cattle industry in several positions including chair of Canadian Beef Export Federation before it was merged into Canada Beef. As chair of the Alberta Beef Producers, he helped direct the beef industry through the 2003 BSE crisis and encourage the restoration of market access for Canadian beef products into international markets. He also chaired the Animal Health Committee and the Beef Quality and Grading Committee of the Canadian Cattlemen Association. In 2005, Arno received the Alberta Centennial Medal for Agriculture Industry and Community Leadership and in 2012 was awarded the Queen Elizabeth II Diamond Jubilee Medal for Service to the Canadian Beef Industry.

He stepped away from his role at Doerksen Farms for a time to serve a term as an Alberta MLA from 2008 to 2012 for the Strathmore-Brooks riding where he gave voice to the farming and ranching community on key issues such as property rights and Alberta’s labour force challenges.

Daniel has brought new ideas to the table such as Gemstone’s purchase of a purebred Red Angus herd two years ago. By closely following genetic research trends, he hopes to continue to develop Gemstone’s selection process to raise the most efficient, low maintenance and profitable cattle possible for his part of the world.

While raising a young family, Daniel also contributes to the community as the volunteer Deputy Fire Chief for the community of Gem and chair of the Gem Grazing Association since 2010. He was also involved with the Cattlemen Young Leaders Program and worked with young researchers in 2015 as part of the Beef Cattle Research Council’s mentorship program to make foreign researchers more familiar with the Canadian industry.

The three have developed a successful system for managing the ranching and farming sides of the business in tandem. Within this team structure Tim focuses on the crops.

“We utilize barley and corn for silage in the feedlot business,” he says. “We grow grain corn that we use as high-moisture grain in the feedlot as well. After we combine the corn, the cattle can graze on the stover which is an excellent grazing source, and this extends our grazing season by a month or two,” he adds.

Cash crops supply another revenue stream and a valuable rotation for the feed crops. Having irrigation available provides them with a wide range of possible options that include flax, canola, alfalfa seed and, on occasion, certified canola seed. “Ultimately,” says Tim, “it’s about diversification and looking for opportunities for the best returns.”

The Doerksens know from experience that raising moderate-framed cattle is more profitable in the long run. Their cows are better forage converters, calve easier, and live longer, thus producing more calves over their lifespan.

Their Second Annual Gemstone Fall Bull and Female Sale will include purebred Hereford and Angus bulls, as well as Hereford, Angus, and Hereford-Angus crossbred heifers. The cattle will be grazing right up to sale time, weather permitting.

“Our cattle are presented in their working clothes so that they display their natural thickness and fleshing ability,” Arno explains.

With the solid history of family, hard work, and good management, the Doerksens are hopeful as they look ahead to the future of their operation and the Canadian industry. The goal for Gemstone Cattle’s breeding program remains the same, get the genetics right and you will raise cattle that work for you and your customers. To learn more about the Gemstone Cattle Company Fall Bull and Female Sale, December 7 at the Bow Slope Shipping Association market in Brooks visit their website www. gemstonecattle.ca or call 403-641-2886.