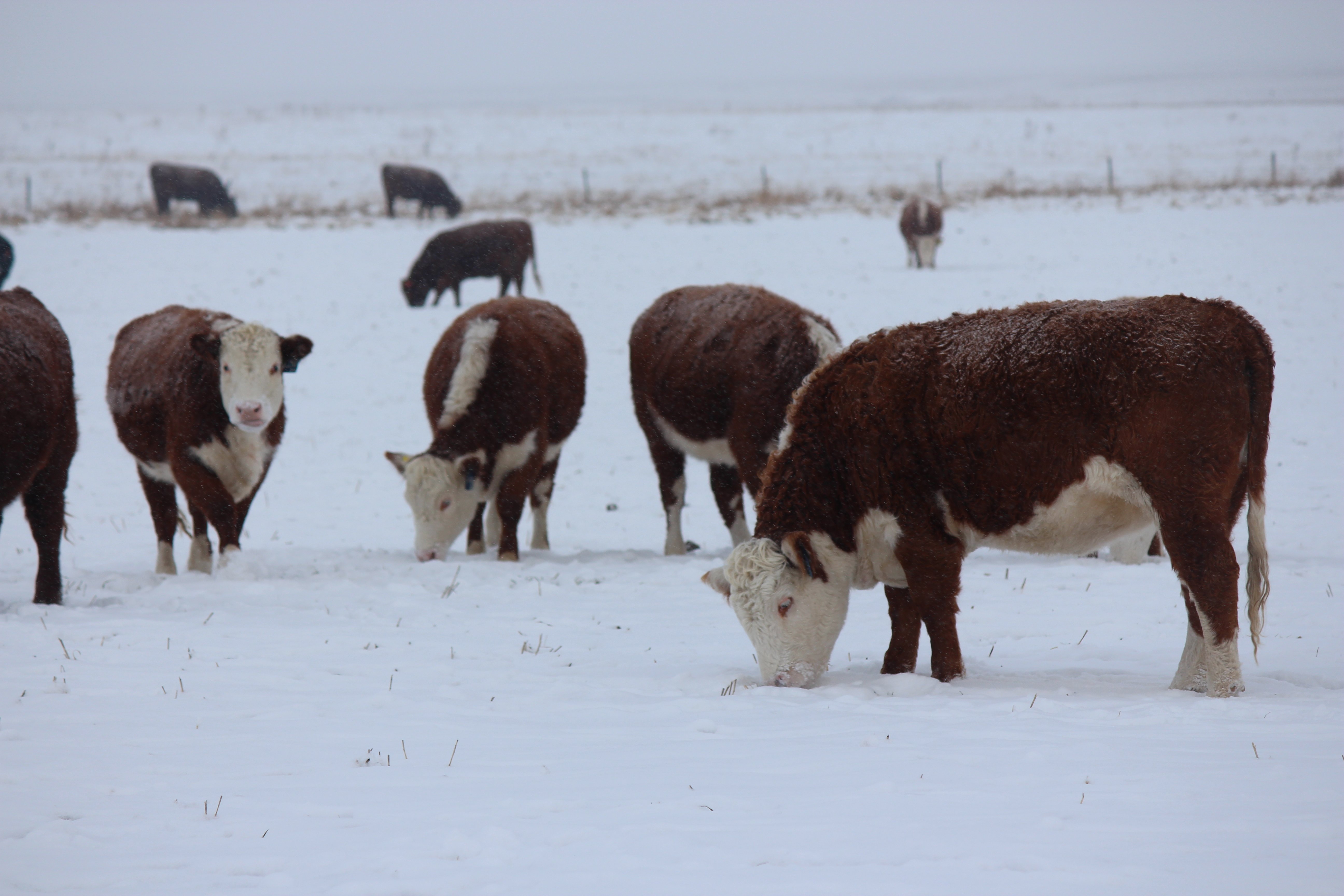 The goal of our breeding program has long been to produce efficient, productive brood cows – deep ribbed cattle that are naturally easy fleshing, structurally correct and have superior udder quality. In our  experience the cows that thrive on pasture and consistently wean a high percentage of their body weight, produce the cattle that are most efficient through the rest of the beef production cycle.

The strength of a pedigree is really in the number of long-lived productive cows that show up in the pedigree and even stronger if the best cows appear multiple times. We take advantage of linebreeding in our cow herd to increase consistency and prepotency of the resulting offspring. The 140W Hereford cow (mother of several of our herd bulls), for example, has 20 cows in her extended pedigree that produced to 9 years of age and 5 of them show up more than once. Our belief is that “when you get the cow right, everything else will fall into place”. All of our Hereford cows were born here and most are daughters and grand-daughters of F-R 8020 Lad 33H. Our goal is to raise efficient, trouble-free cattle
that work for those who take advantage of Gemstone genetics.

Carcass performance is one of many factors we follow closely. A group of 150 of our Hereford steers were fed to slaughter in slightly less than 14 months. These steers had a feed conversion rate of 5.75 lbs per pound of gain and delivered the following grading results:

Raising and using our own herd sires and keeping the gene pool close has been one of the biggest factors in improving uniformity and consistency. These results have been most significant in our Hereford cattle. All of our Hereford cows were born here and are the mothers of our herd bulls with outside genetics being brought in on occasion.

We have been involved in various performance testing initiatives over the years. Most recently the development of DNA testing has improved our understanding of why some animals are more efficient than others. There are three Leptin gene variants of economic importance:

The TT genotype – increases the rate of fat accumulation compared to the CC genotype which
means:

We Leptin tested our Hereford cow herd more than 10 years ago. The results were interesting in that we had an 87% incidence of the TT allele or version of the Leptin gene. At the time, the industry average for Hereford cattle was only 32% TT for Leptin. Learn more about Leptin Research.

At Gemstone, we participated in the Canadian Hereford Association Residual Feed Intake (RFI)
project measuring Net Feed Efficiency to generate an Expected Progeny Difference (EPD).
Preliminary results indicate we are on the right track. In this project, 26 of our bulls were in the test that had RFI EPDs generated with 23 of the animals (88%) ranking in the top 18% of all bulls in the group that were tested for net feed efficiency.

While the various scientific testing results have been both interesting and impressive to us, none of it supersedes the importance and priority of breeding for fertility, longevity and functional traits in our cow herd. The informed application of good science can, however, help us understand why some animals excel and others falter and how to achieve the desired results. Breeding, feeding and selection based primarily on EPD numbers has mostly been detrimental to the breed – resulting in cows that are too big and inefficient. Balance and optimization with smaller framed cows is our priority and results in greater profitability in the cow herd.

Feeding our own calves through to finish has given us a strong appreciation for the principle of optimizing production traits. By participating in the full cycle of cattle production we can monitor all aspects of breeding, trouble free calving and efficient weight gain. At the end of the day, cattle breeding is about converting forage into beef profitability.

Gemstone Cattle Company is pleased to be the Canadian distributor for Sustainable Genetics, a beef cattle genetic marketing company based in Carrollton, Georgia. Their focus is to promote reproductive longevity and net profit for producers and to preserve and promote the great maternal bloodlines that still thrive today. Our philosophy of raising forage-based, moderate framed, efficient cattle matches the goals of Sustainable Genetics. We distribute their semen to Canadian ranchers.

View Our CattleLearn About Genetics